Dynamic access control (DAC) facility, introduced in windows server 8 is a nice provision for security management. Previous versions of windows enforced file/folder security by granting access to the users and groups directly. Many security groups have been created and managed to offer access. With DAC, administrators could add conditional expressions with AD attributes to grant the permissions. This has considerably reduced group management complexities. Dynamic Access Control can be applied in addition to any existing share and NTFS permissions, which enforces centrally governed rules. Dynamic Access Control is one of the key components of Active Directory in Windows Server 8.

Earlier, claims based authorization has been used in Active Directory Federation Services (ADFS) and Windows Identity Foundation (WIF). In similar fashion, claim based authorization is applied in DAC with AD attribute values as a claim. These claims can be used in Central Access Policy to define the condition for access. You can set claims for both users and devices. For example “user.department == Finance” and “device.managed == true”. The other exclusive feature which server 8 attracts everyone is classifying the file/folders by tagging the resource properties. Hence, also with the resources’ properties the access is controlled. So, now you could write a condition like “resource.country == US” and “user.department == Finance”.

Some of the nice features of Effective Permissions Report are: 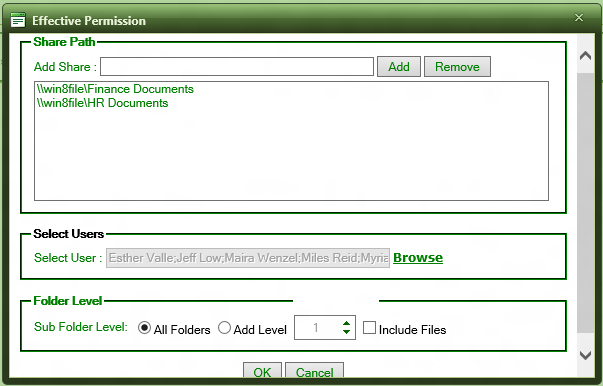 The below screen shot shows the part of the Effective Permission Report generated.

The administrator can group the generated report by any of the columns as shown below (Grouped by share path and user name).

This grouped report is same as in the Windows Server 8 Effective Permission Security Properties Tab. The above generated report is shown with Advanced Permissions set. Administrator can even switch to Basic Permission set also as shown below.

In the generated report, we can filter the report based on multiple columns as in Microsoft Excel.

Users in multiple groups may result in token bloat